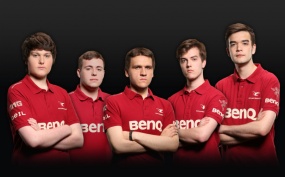 Mousesports (mouz) is a professional gaming organization based out of Germany. Mousesports fields teams in many different games and are particularly known for the company's successful Counter-Strike team. Mousesports is one of the founding members of the G7 Teams.[1]

Mousesports was formed in 2002 in Berlin, Germany as a Counter-Strike team under the same given name.

Mousesports' DotA division once featured the likes of KuroKy, Miracle and Drayich. They were then considered a powerhouse in the European DotA scene. However, due to internal conflicts, Mousesports announced on April 20, 2009 that it would be withdrawing its support for DotA, despite the considerable amount of success they had.[2]

In September 2012, ComeWithMe departed from the team to form Team Y. 1437 also left the team. Black^ decided to take a break from competitive Dota. The three were temporarily replaced by Alex, Kebap, and KuroKy.

In October 2012, the players parted ways with Mousesports.[4]

In February 2013, KuroKy was traded to Natus Vincere.[5] FATA- aswell as Black^ shared the position of the captain.

In March 2013, qojqva officially joined Mousesports as the fifth member.[6]

In April 2013, Alex was removed from the team, and syndereN was announced as his replacement. He also took over as captain.[7]